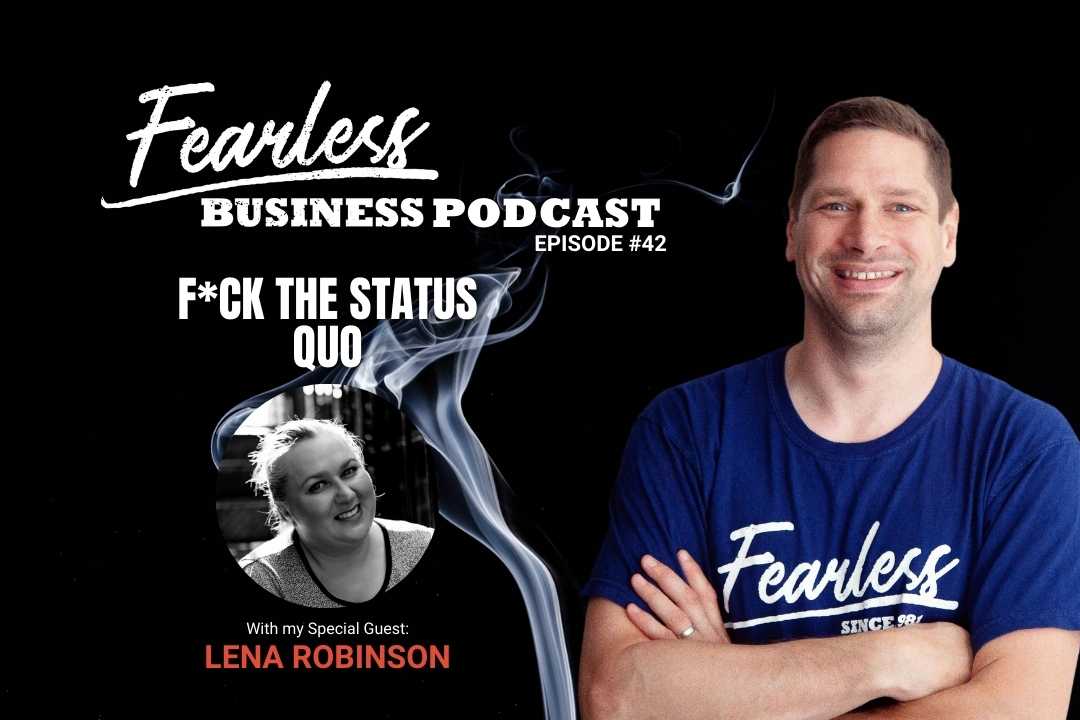 Lena’s a straight-talking Kiwi that has built a powerful reputation for herself as a savvy business person in London over the last 17 years. In 2018 she threw a grenade into her life to start FTSQ. She wanted to create a community that supported non-conformists and the business owners within that community. The aim is to support them, via her consultancy, in achieving everything they were told they couldn't by F***ing with The Status Quo.

She uses all of the knowledge, experience and the huge network of people she’s gained after almost 30 years in business across multiple countries to help others. She’s had a highly successful career in 'adland', started three companies (FTSQ’s her third, she sold her second). Has traded her parents business out of near disaster when the Inland Revenue (NZ equivalent to HMRC) threatened to end them. Has mentored many bright young people that have gone on to do amazing things, and has made millions for the companies she’s worked for and with. Lena is a tenacious force of nature. She’s a maverick, but she’s also a caregiver, she will forever watch over the non-conformists because they often struggle to stand up for themselves, she does so because she often sees in them that others do not.

Lena believes there is power in the unconventional, the different and the unorthodox.

The Fearless Business podcast welcomes Lena Robinson, a successful entrepreneur with over 17 years of business experience. In 2018, she used her knowledge and expertise to start FTSQ, creating a community that supports non-conformist business owners. Through her consultancy work, Lena helps business owners to achieve everything they were told they couldn’t do by F***ing the Status Quo. Lena believes there is power in the unconventional, the different and the unorthodox.

What is FSTQ and how do they work?

FSTQ works with people who are non-conformists in business. Lena describes this as people who work in ‘squiggly lines instead of straight lines’. From a consultancy perspective, businesses often hit a wall at some point and they need guidance to get to the next step. From there, there are three areas that FSTQ helps you with. The first is completing a business audit and looking at what isn’t working, but also revealing any untapped potential. From there, it’s all about putting those fixes in place, whether that is done by FSTQ themselves or the FSTQ Collective, a group of strategic partners who do the same work as FSTQ. As Lena says, you shouldn’t pretend that you can do everything. Then there is also the FSTQ community and often Lena and her team will reach out to the community because there is always a way to deal with the issues they uncover in a business.

How to start breaking the status quo

If you are a business owner, do you fear doing something different because you are afraid of the consequences of not conforming?

From an early age, Lena’s life was non-conformist and she realised that she didn’t fit into the boxes, instead forging her own path in life. She now finds fear to not be an issue when it comes to business. How do you get to that stage though and how do you make those initial steps to break the boundaries?

The key thing Lena recommends is trusting your gut. It’s about what you feel in your heart of hearts is right. It’s about listening to your instincts. Whether that’s leaving a corporate job or recognising a business isn’t working, trust yourself and know when it’s time to do something different. You learn from your mistakes and they help you grow as a person and a business owner.

Why conforming can be damaging to your business

A consequence of not conforming that is feared, but actually not true, is the idea that you are scaring people away or reducing your chances of getting clients and working with people. By doing the same as everyone else though, your business doesn’t stand out. There is nothing that sets you apart, so why should people work with you? Regardless of your industry, people also want to be working with the real you, and if you are trying to be something you aren’t comfortable with, this comes across in your business.

Not conforming is actually a way of differentiating yourself in the market and stepping into your own skin. Both Robin and Lena see people saying their target market is SMEs, but this equates to the majority of businesses. The fear of rejection can be one of the biggest blocks stopping you from growing, but if you do take the time to properly niche and specialise your offerings, then you will have people coming to you and wanting to work with you.

People can also find the idea of being a non-conformist hard to process because they think others will perceive them differently. At the core of it though is just being true to yourself and FSTQ is there to help you feel safe and supported as you go on that journey.

To hear more about Lena’s incredible story, listen to the full podcast episode.

How to Get Hold of Lena