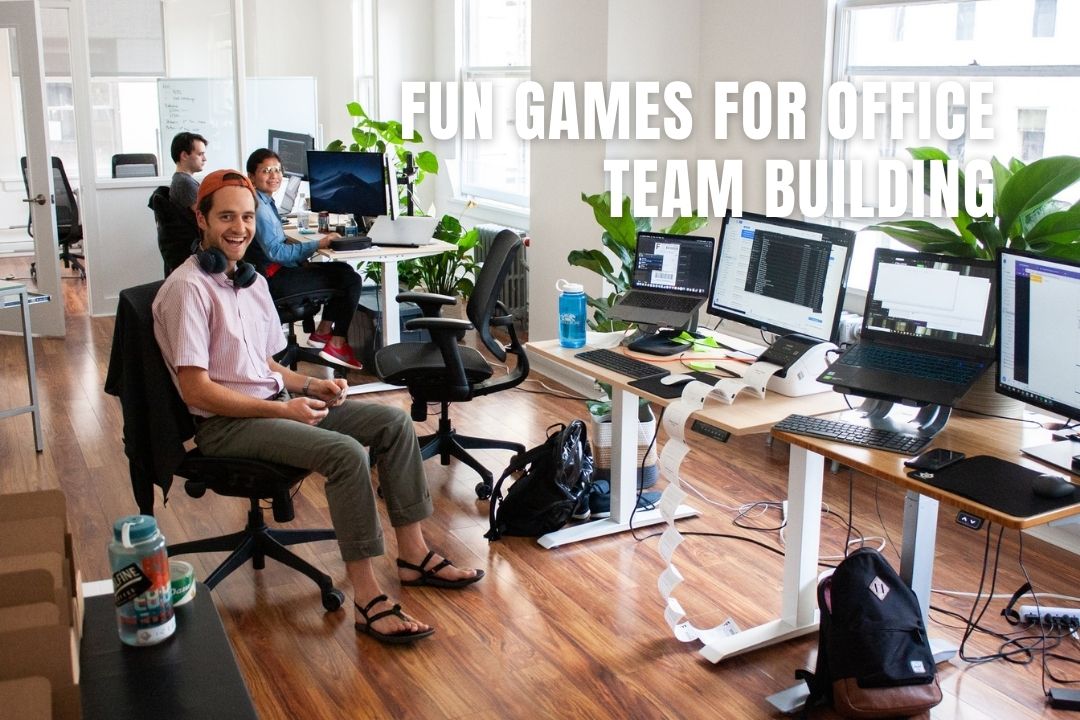 Team building can be a challenge, particularly with so many having spent a year or more out of the office before making recent returns. But while some of the UK’s largest employers (from banks to retailers) indicated during the pandemic that they would not require a full return to work –– and some have adopted hybrid models –– there are in fact teams operating in offices once more, reports the BBC. And that means a fresh opportunity for genuine bonding!

Indeed, one can argue that team building is more necessary than ever before, and in person it can be done in all sorts of ways. Among these ways, as per our previous piece “Productivity: How to Boost It In Your Workplace”, a puzzle or game that gets everyone involved can go a long way toward fostering some team unity. So in this post, we’ll get into some specific in-person games you can play for office team building.

Blackjack is a rather simple card game, and while we tend to think of it as a casino game, it can really be played anywhere –– including the office. In this game, each player is dealt two cards and has the option to “hit” (take another card) as many times as they like, or “stay” (stand pat) –– the goal being to get as close to 21 as possible without going over, or “busting.” Any player who is closer to 21 than the dealer (or doesn’t bust when the dealer does) wins. As long as someone in the group will take a shift as the dealer, it’s easy enough to set up. Plus, it’s a game everyone will be able to win at now and then. Per a blackjack guide at Parade, the “house” (in this case the dealer) wins only about 55 out of every 100 hands played. That means plenty of winning to go around. The same guide also notes that blackjack is a particularly social game; what’s happening with the cards is fairly straightforward, so people have plenty of time to chat.

Sticking with casino-style card games, poker makes for another good option. And while there are quite a few variations of the game, Texas Hold‘em in particular should ring a bell. This is the most popular form of the game by a considerable margin, but even if some team members aren’t familiar with it, learning how Texas Hold’em is played is fairly straightforward. Each player starts with a bet (which is mandatory for the small and big blind –– the two players left of the dealer), and then the dealer gives two cards to each player. From there, players can decide to call (match the big blind’s bet), raise (bet even more), or fold (give up their hand and lose what they’ve bet). The dealer then draws three cards face up, which all players can use simultaneously alongside their own two cards, and there’s another round of betting actions. This process is then repeated for a fourth community card, and then a fifth (known as “the river”), after which there’s one final round of betting before everyone left in the hand turns over their cards. Now, presumably you won’t be doing all that betting with real money in an office setting –– but poker chips work just fine even if there’s no real cash behind them, and you can always organize a fun prize for the player who amasses the most chips. All in all, it’s perfect for groups of about 6 to 10 (although you can even play with up to 22 players!).

This is a different sort of game (and perhaps a slightly lesser-known one) in which players use their fingers to flick pieces or chips onto certain places on the board –– or to aim at their opponent’s chips in order to hit them off the board. While it’s slightly more complicated than this, you can almost think of it as a form of circular shuffleboard, played out on a specific surface. And it’s just the kind of game to get people animated and enjoying themselves; it’s hard not to exclaim when a piece slides to a stop in just the right spot! If you have a small team, you can rotate easily through two-on-two matches; for a bigger team, multiple Crokinole boards (you can even print some out and stick them on a flat surface if you like) will do. And if people on the team aren’t particularly familiar with this game, don’t worry! It’s fairly easy to pick up, and it definitely seems to be catching on and growing more mainstream; this past winter there was even a giant Crokinole board in London, which made for a handy bit of socially distanced recreation (though who knows if it will return).

Last but not least, Codenames is a well-known card-based game that requires two groups of players. Each group is seeking to decipher the code names for its agents, which are spread out on a 5x5 grid of words. To do so, they must guess words based on one-word clues given out by their designated spymaster (each team has one). However, they must also not guess the word corresponding to the lone assassin –– as doing so ends the game. Find all of your agents, and you defeat the other team. It’s a clever little game, and one that a review by the Spruce specifically praises for fostering “productive brainstorming” and “silly, laugh-out-loud moments” –– both of which, we need hardly say, are ideal for team building!

Getting back into the office routine can be a bit overwhelming, particularly of the unusual circumstances we’ve all endured. But the transition can be made much easier with a general sense of comfort and camaraderie among team members. Team building activities like these and other games will go a long way in helping your team get back into a routine.