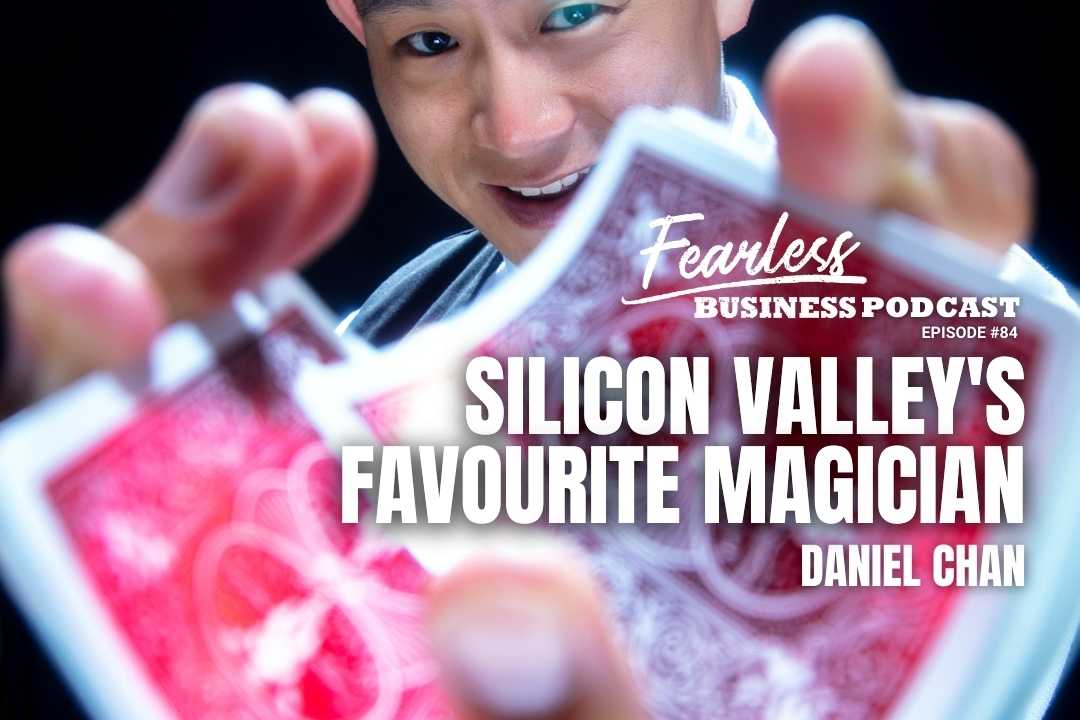 Today our guest is Dan Chan the Millionaires’ Mentalist. Buzzfeed profiled him and called him “Silicon Valley’s Favorite Magician” He’s known for unconventional magic & illusions - including pickpocketing & hacking into iPhones. Daniel is a pre-IPO PayPal & magician who's pivoted to Zoom. He has performed over 300 virtual shows since March.

His career is taking off! Last year alone he was featured on The Wall St. Journal, the Hustle, the Voyage LA. If that weren’t enough Business Insider and CNBC both featured him twice in 2020! Today he’s going to talk about how he pivoted not only to Zoom but how he’s pivoted from Dan Chan the Magic Man, to Dan Chan “The Millionaires’ Mentalist.” And how he became one of the most in-demand entertainers on Zoom.

Hypnotic Marketing from the Millionaire's Mentalist

How do you perform a magic show over Zoom? Do illusions and marketing link together? The answer? Yes. On the Fearless Business podcast, Robin speaks to Dan Chan, a world-renowned magician, illusionist, and the Millionaire’s Mentalist, who has successfully pivoted his business online since the pandemic.

Translating a fearless attitude into business

Before starting his current business, Dan’s life experiences already included skydiving and bungee jumping. He believes that having the best stories to tell leads to success. He wanted to be the most interesting person in the room, so that people won’t forget you. Even if how you start off your journey seems like a gimmick, people later get to know the real you. You can’t be afraid to put yourself out there and reach out to people. Even if something happens which you originally perceive as failure, by being open and honest about it, you can actually turn it into a success. When the pandemic hit, Dan’s business lost $8000 in one week. Straight away he reached out to the major networks such as Voyage LA and CNBC. Being fearless and transparent about what had happened and being one of the first people to be honest about how his business was affected in turn brought Dan more interest and he was then able to start running Zoom shows and begin charging for them. So much of this newfound success didn’t just come from Dan’s work in his career, but also by being himself and not being afraid to open up.

Knowing your ideal client is key. Dan specialises in performing magic shows for the corporate industry. In his work, it is not necessarily about having the world’s best magic trick, but about knowing your audience and how you speak to them. You want to get clear on your ideal clients and how your service benefits them. For Dan, this was to bring entertainment to companies and their staff and create unforgettable moments. He believes the key to getting started is not charging a lot as your first aim, but getting your foot in the door and making those client connections.

Using rhyme or alliteration in your marketing creates a hypnotic feel. They make names and taglines more memorable and have a chant-like quality to them. During magic shows, Dan has had people say his name ‘Dan Chan the Magic Man’ during those moments when you have to say the magic word during a trick. This means people remember his name more easily, compared to watching someone else who could do an amazing trick, but because they don’t use their name, you can’t remember it. Really focusing on the words you use and how they link to you and your business can have a huge impact.

Memorable marketing also comes from giving and sharing with your audience. Too often, people are afraid to give away their secrets or knowledge. A lot of the time though, it is not about the trick, but the value you bring and networks you get into. If you are writing a business book for instance, you can share your whole story and people will still come to work with you because it is the implementation and accountability they want help with. Sharing as much value with your audience as possible is what will bring you more recognition.

Getting people to discover your value online goes further. There are so many podcasts. There are so many YouTube channels. The online market is oversaturated. It’s also important to consider that the channels you do have are only going to be accessible to people at certain moments. You can’t watch a video when you are driving, but you can listen to a podcast. Make sure you talk about where else your audience can find you and discover even more of your value.

Intrigued by hypnotic marketing and the magic side of business? Listen to the full podcast episode now to hear more about Dan’s journey and his extraordinary career.

How to Get Hold of Dan