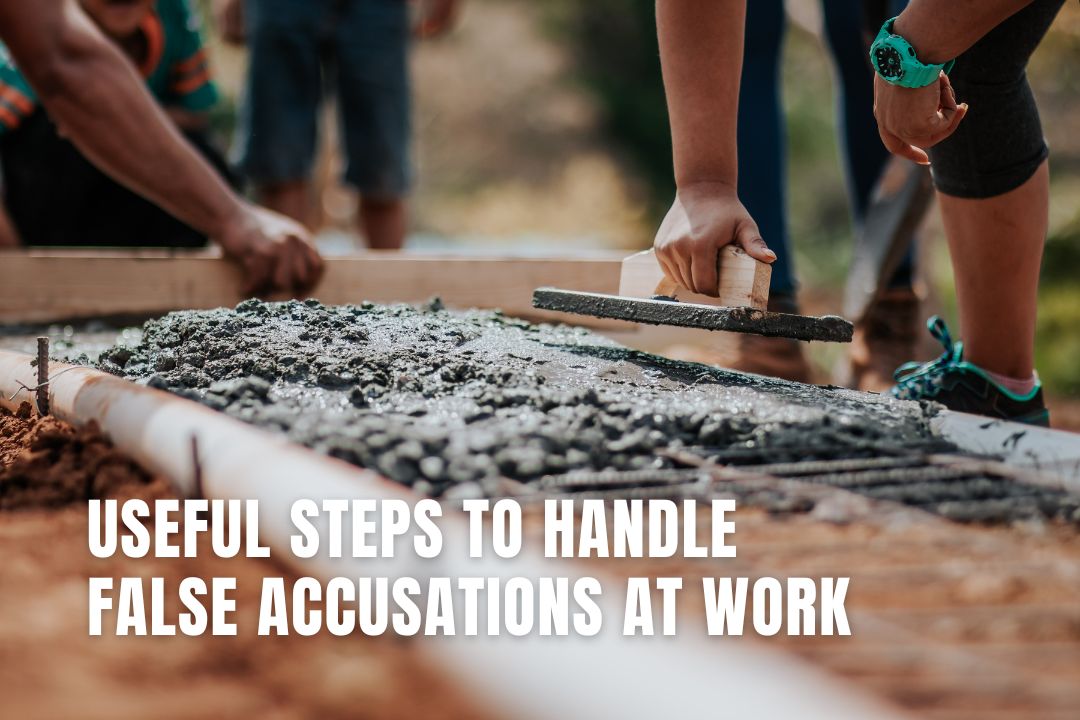 Imagine walking into the office one morning to a nasty rumour someone spread about you. A false accusation can change everyone’s outlook on you and ruin your reputation. Your self-esteem and self-confidence slowly go down the drain, and you become a mere shell of the person you used to be. Some people are unfortunate enough to lose their jobs over these false accusations because they were unable to clear their names. Common reasons why someone would accuse you falsely of an act are jealousy and guilt. Here are some useful steps to handle false accusations at work.

Carry yourself with dignity

Remember that even though you feel deeply wronged and frustrated, you are still in a professional setting. It is in our human nature to want to lash out at the person who made us feel like the world is crashing down on us. However, it would be wise to stay calm and composed. Avoid causing a scene as erratic behaviour will only make the situation worse.

An excellent idea to steer the investigation in your favour would be to gather supporting evidence. Start by creating a timeline of events and jot down every minute detail that happened before the alleged incident occurred. Receipts, emails, text messages, and call recordings could come in handy to show you did not commit the heinous act. Once you compile all the evidence, you could store them in a file or a folder for safekeeping.

As you create your timeline of events, you might remember a few people who can vouch for you and confirm your whereabouts at the time the alleged incident happened. However, it is crucial to note that you shouldn’t be speaking to other employees about the case while the investigation is still ongoing. Therefore, the best thing to do would be to approach HR and let them know there are a few people who they could question and provide useful information to clear your name.

Cooperate during the investigation

The HR team will have to investigate the case to determine whether or not you are guilty. If you are innocent, you have nothing to worry about as the truth will come out eventually. Therefore, it would be best to cooperate with the investigation so you don’t seem like you have something to hide. Ensure you control your emotions and give a factual account of all the events you can recall. When called upon to answer questions, do so truthfully and avoid omitting any crucial details.

Speak to a lawyer

There are a lot of intricacies and penalties that come with a false accusation charge. One wrong move and you could end up incarcerated for a time. For instance, if you are falsely accused of sexual harassment against your co-worker, it would be wise to hire a sex crimes attorney to help fight for your rights. Your lawyer will be present with you during questioning and tell you the potential penalties you might face and possible outcomes.

Avoid talking to the accuser

You probably have a hard time believing that your co-worker could accuse you falsely. We understand the urge to approach them and give them a piece of your mind. Maybe you would like to know what drove them to say such defamatory things about you. However, talking to your accuser is a dangerous decision that could hurt your case. You wouldn’t want to give them more reasons to implicate you. Therefore, it would be wise to cut communication with your accuser during the investigation.

As the saying goes, honesty is the best policy. Your accuser is eagerly waiting for you to slip up so they can take you down. It would be wise, to tell the truth, and avoid embellishing your words to make you look less guilty. You would rather stay silent than speak out of desperation and later come to regret your words. If you are honest, the truth will eventually set you free.

Ensure your rights are not being violated

Ideally, you are innocent until proven guilty. A false accusation charge shouldn’t mean that you should be treated unfairly. You would also be doing yourself an injustice if you were ignorant throughout the entire process. Therefore, it would be best to conduct thorough research to ensure you know your rights and how the investigation should be handled. Your lawyer could also chip in and educate you on your rights and what to expect.

A false accusation doesn’t have to loom over your head, especially when there is something you can do to clear your name. Follow due procedure at work and seek legal help where you can.