Why Your Internal Value System is Flawed! 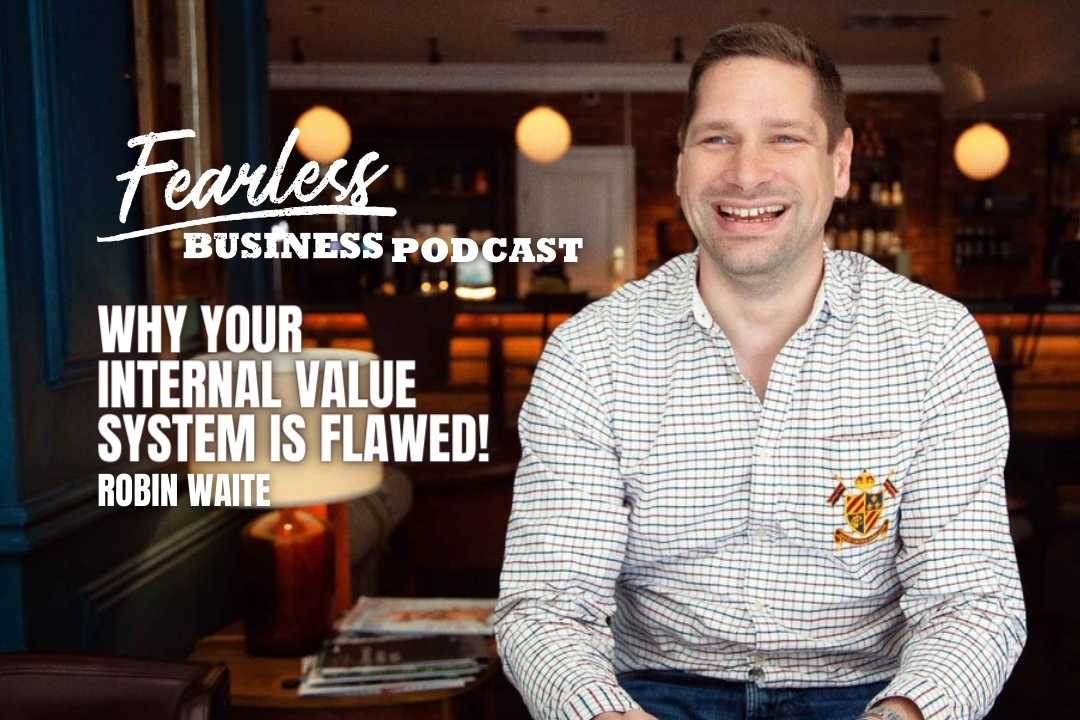 A bit about today’s episode

In this episode of The Fearless Business Podcast, host and coach Robin Waite outlines what value systems are and how attitudes embedded into entrepreneurs from their childhood can result in them being flawed.

Why Your Internal Value System is FLAWED!

For most people, their internal value system is installed into them between the ages of 3 - 5 years old. As a result, life lessons, fears and attitudes involving finances and work ethics have influenced entrepreneurs into unknowingly running their businesses incorrectly.

In this episode of the Fearless Business Podcast, host and coach Robin Waite provides an in-depth analysis of why this childhood blueprint is wrong and advises listeners on rectifying this.

The Differences Between Internal and External Value

Robin argues there are two types of value systems, internal and external value. The main differences between the two are:

The two types of value systems feed into each other. Robin explains that when people are feeling the most insecure internally, that’s when they prioritise improving on the things they have obtained externally. So, for example, if a business person feels like they aren’t successful enough, they may splash on a flashy new Ferrari or Rolex to appear like they are.

However, the issue here is that the void won’t be filled by obtaining things of external value. They are only temporary fixes. That new Ferrari may be the talk of the office for a while but will soon be outshined by something else. This is why Robin believes entrepreneurs should learn to balance both value systems by working from the inside out.

How To Balance The Value Systems

There are four key pillars involved when it comes to balancing your internal and external systems. Many entrepreneurs find external success and freedom once they accomplish these four pillars:

Where wealth and health are concerned, Robin warns of the toxic cycle entrepreneurs may fall into if they prioritise external values. For example, many entrepreneurs impulsively spend on large marketing investments before executing the right amount of research beforehand when it comes to selling. If the investment fails, the entrepreneur may find themselves in an even worse financial predicament, which creates stress and influences physical health.

Ultimately, patience is a virtue. Instead of recklessly spending, Robin recommends that entrepreneurs dedicate a certain period for obtaining some of the four key pillars before investing externally. Currently, there’s a trend going around with young entrepreneurs between the ages of 18 - 20 where they are to achieve financial freedom by the age of 30.

How do they do this?

They learn to invest wisely and balance. When getting paid monthly, they set aside at least £100 and invest in stocks, ISA’s etc., so it can grow over time. They’ve acquired the skill of spending wisely and putting life’s luxuries on hold so they can fully indulge in them later. Robin emphasises that in order to achieve a pure balance between internal and external values, entrepreneurs must learn how to prioritise and look ahead.

Where Do The Insecurities Stem From?

Robin argues that many peoples fear and insecurities surrounding money, attitudes and finances stem from their childhood. As a child, many have been told that “money doesn’t grow on trees” or that it’s “the route of all evil” when in reality it’s something that’s simply a part of life it shouldn’t be feared.

More often than not, a lot of advice surrounding money suggests that people shouldn’t “waste” their money on subscription services such as Netflix or weekly coffees from Starbucks and are instead advised to put that money to good use. However, as much as this advice is meant well, it eradicates people of the simple pleasures in life. The bottom line is, you don’t need to be frugal to achieve lifetime success. Entrepreneurs can still find themselves financially independent even if they choose to splurge on a holiday one year or keep up their Disney+ subscription.

When used in moderation, money can open doors to happiness and escapism. So it most certainly isn’t something that should be feared!

Join our amazing community of Coaches, Consultants and Freelancers on Facebook:
>> https://facebook.com/groups/ChargeMore
And check out the Fearless Business website:
>>https://fearless.biz