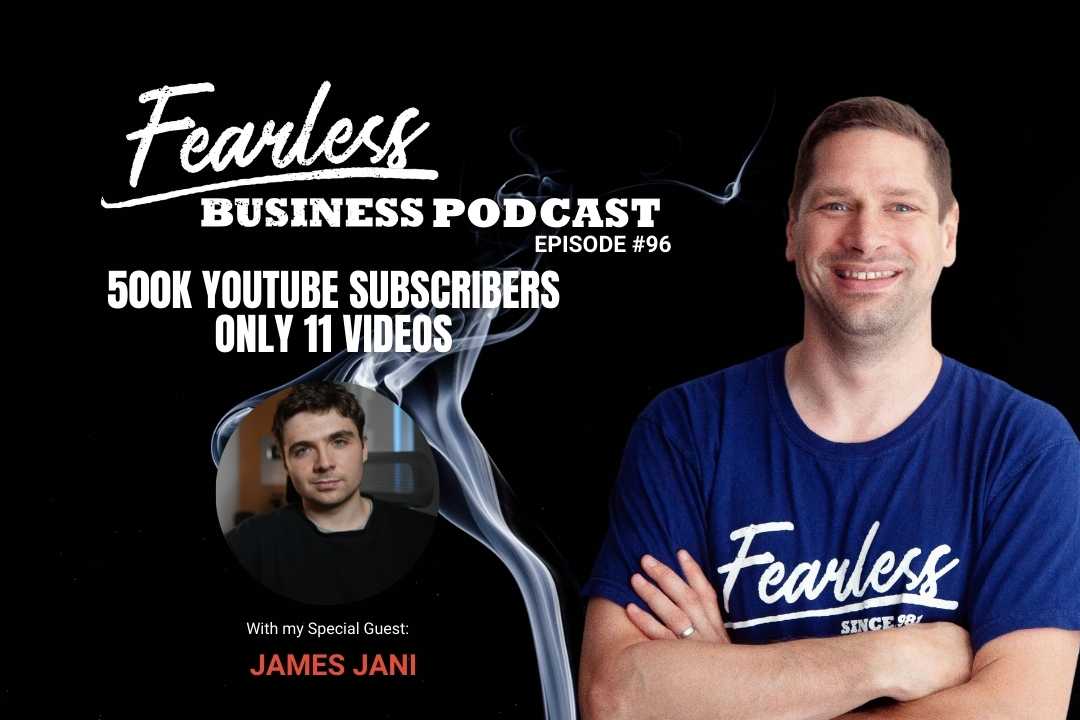 James Jani is a popular YouTuber that makes documentary-style content, 750k+ Subscribers, 20+ million views. He used to want to be an actor, lost his passion for acting and instead became interested in entrepreneurship. YouTube allowed him to combine his creativity with entrepreneurship which has lead to his remarkable success today.

As part of the 100th episode special, Robin Waite welcomes popular YouTuber James Jani to The Fearless Business Podcast. He joins Robin to talk about the highs and lows of his YouTube journey and offers listeners advice for starting their own YouTube Channel successfully.

Initially, James was inspired to start a YouTube Channel after looking at successful entrepreneurs on Instagram. However, at the time, he had just given up on his dream of becoming an actor and had also failed to launch a social media company.

This caused him to look into the world of YouTube and also entrepreneurship. From this, he proceeded to go down a YouTube rabbit-hole of self-help speakers and motivational coaches. Through his research, he found that many of the coaches giving advice were underqualified, often fraudulent, which drove him to create his first videos, “The Rise of Fake Gurus” and “The Toxic World of Self Help”. Consequently, these videos ended up becoming viral. James credits his viral success to the amount of effort he put into the videos. He is incredibly passionate about helping others. By exposing the con artists that disguise themselves as gurus, he feels he’s helped shed light on a scam that many find themselves falling victim to.

This is where James reiterates that to become successful on YouTube, you must be incredibly passionate about what you are sharing with the world. Sure, a case like James’ is excellent, and for that to work for everyone would be fantastic. However, James explains that it can take up to three years for a channel to start becoming successful.

Increasing Your Chances of Success

James has many viewers who come to him and ask him if any particular formula he followed caused him to gain such quick results. Unfortunately, there is no such formula, but James shared his tips on how to market a channel successfully:

“The moment you start a Youtube Channel and upload a video, you are 99% ahead of those who said they were going to but haven’t” - James Jani.

The Rise of The “Creator Economy”

James’ pathway to success is becoming an increasingly popular one. With over 40 million YouTube Channels in existence currently, everyone wants to broadcast themselves. Owning a popular YouTube channel is now a great way to generate income once your videos become monetised. For example, one of the most popular kid’s YouTube Channels, “Ryan’s World” (formally known as “Ryan’s Toy Review”), earns 30 million dollars a year through YouTube videos alone, excluding brand deals and merchandise.

James claims that this rise of YouTube fame has created what he deems as a “Creators Economy”. Once “frowned upon” by society, creative jobs are now integral to businesses and global enterprises. James believes this has all worked in his favour; when he looks back on his acting experience, he couldn’t have imagined incorporating elements ; it into his working life, and it is incredibly successful.

“Creative economy is causing the notion of ‘starving artists’ to die out. You are now seeing these businesses relying on these creative outlets to help advertise their products on social media through a sponsorship.”

James likens the rise of the creator economy to Disney. He is predicting that YouTube may reach the same scale one day.

James encourages business owners to utilise YouTube for product promotion and sponsorships and create a channel themselves. As an entrepreneur himself, James recognises that it can be hard to implement creativity into YouTube videos when someone is so used to a practical, results-driven environment. If you individually struggle to be creative, James advises throwing yourself in the deep end, practising getting used to being in front of a camera and get a feel for it.

As soon as you become more comfortable, alongside implementing the tips above, you’ll find yourself slowly improving when creating YouTube videos and it being a less stressful process. James emphasises not just create content for content, do something you want to do or something that you have researched that has worked in your field. From doing this, you’ll reduce the chances of burnout and create content that both yourself and viewers enjoy.

How to Get Hold of James